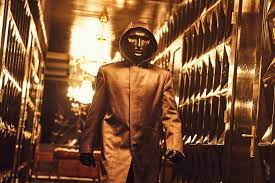 In the same place they also finds the dead body of Guard.No.28. So know they get aware there is someone in the facility.

In the next scene the officer, reaches the Frontman’s room. he is checking the room, he arrives at a room there was everyone’s record. The officer checks and finds the records of the winners. There was his brother’s name, that means he was the winner.

The players were taken for the fourth game –

After that old man, took pity on him and gives his all the marbles to Seong.