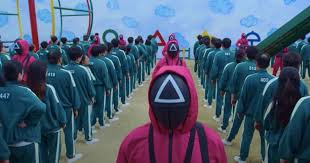 Squid Game  is South Korean show is a survival thriller about a group of adults in financial despair who are forced to play children’s games. Basic story revolves around Hundreds of cash-strapped players accept a strange invitation to compete in children’s games. You’ll get here Squid Game Season 1 Episode 1 Story Explanation . Moreover you can find here another movies review.

After that Seong arranges money and takes his daughter to dinner. After it he reaches the station hurriedly unluckily, his train was missed. A man comes to Seong when he was waiting for the train while sitting there. The unknown person gives Seong a card while saying If you want to earn some money contact the number.

Here Seong meets his classmate Sang-Woo, and he gets shocked seeing him. Beacuse he has gone out of the country for business, but he is here.

Remaining Survivors somehow complete the game, and they are 255.