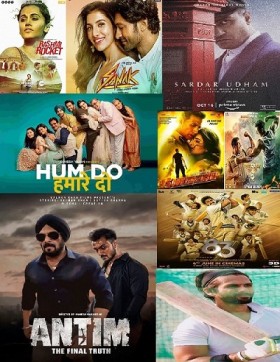 Here you can find the list of latest Upcoming Must Watch Bollywood Movies 2021. Below you can read the details about new upcoming movies starcast, release date, genre.

Rashmi Rocket is an upcoming Indian sports drama film featuring Taapsee Pannu in the leading role. The other casts are Priyanshu Painyuli and Abhishek Banerjee. Akarsh Khurana is the director of the film and produced by Neha Anand, Ronnie Screwvala & Pranjal Khandhdiya. The music of the film was composed by Amit Trivedi. The film will be releasing on ZEE5 on 15th October, 2021.

Sanank is an upcoming action thriller Indian film releasing on 15th October, 2021 on Disney+ Hotstar. The main casts of the film are Vidyut Jammwal, Neha Dhupia, Rukmini Maitra and Chandan Roay Sanyal. The movie is a remake of the American film John Q released on 2002.

Sardar Udham is an upcoming biographical film based on the life of Udham Singh. The film features Vicky Kaushal in the lead role. Udham was a revolutionary freedom fighter who took revenge of Jallianwala Bagh Massacre by assassinating Michael O’Dwyer in London. It is releasing on Amazon Prime Video on 16th October 2021. Certainly it is one of the much awaited film of this year.

Bhavai is an upcoming Indian romance film featuring Pratik Gandhi and Aindrita Ray in the main roles. It is releasing on 22nd October, 2021.

Hum Do Hamare Do is an upcoming comedy drama film releasing on 29th October, 2021 on Disney+ Hotstar. The film is produced by Dinesh Vijan and directed by Abhishek Jain. The main leading casts of the film are Kriti Sanon, Rajkummmar Rao, Ratna Pathak Shah and Paresh Rawal.

No Means No is an upcoming romantic thriller film featuring Gulshan Grover, Dhruv Verma, Anna Guzik and Sharad Kapoor. It is releasing on 5th November 2021.

Sooryavanshi is an upcoming action film releasing on 5th November 2021. Rohit Shetty is the director of Sooryavanshi. The main casts of the film are Akshay Kumar and Katrina Kaif. The supporting role played by Gulshan Grover, Niharica Raizada, Jackie Shroff, Abhimanyu Singh, Jaaved Jaaferi, Vivan Bhatena. It is one of the must watch upcoming movie.

Bunty Aur Babli 2 is an upcoming crime comedy starring Saif Ali Khan, Siddhant Chaturvedi, Rani Mukerji and Sharvari Wagh in the main roles. It is a sequel of famous film Bunty Aur Babli released on 2005. The film is scheduled to release on 19th November 2021.

Satyameva Jayate 2 is an upcoming action film releasing on 26th November, 2021. Milap Zaveri is the director of the film and produced by T-Series. The film features John Abraham and Divya Khosla Kumar in the lead roles.

Antim: The Final Truth is one of the most awaited action thriller film of 2021. It is starring Salman Khan, Aayush Sharma, Mahima Makwana, Pragya Jaiswal in the main roles. Salman Khan Films is the producer and directed by Mahesh Manjrekar. The story of the movie is based on the Marathi film Mulshi Pattern relased on 2018. It is releasing worldwide on 26th November 2021.

Tadap is an upcoming romantic action film starring Ahan Shetty and Tara Sutaria. The release date of the film is 3rd December, 2021.

Chandigardh Kare Aashiqui is an upcoming romantic film of Ayushmann Khurrana and Vaani Kapoor. Abhishek Kapoor is the director of the film and T-Series and Guy in the Sky Pictures are the producers. The release date of this film is 10th December, 2021.

83 is an upcoming Indian film based on the 1983 cricket world cup. The main character of cricketer Kapil Dev is played by Ranveer Singh. The other star cast of the film are Deepika Padukone, Pankaj Tripathi, Amrita Puri, Jiiva, Boman Irani, Tahir Raj Bhasin, Harrdy Sandhu, Saqib Saleem, Ammy Virk, Sahil Khattar and Nishant Dahiya. The movie release date has been postponed due to the rise in COVID-19 cases from June month to 24th Decemeber 2021.

Jersey is an upcoming sports drama film starring Shahid Kapoor in the lead role. The other main casts are Pankaj Kapur and Mrunal Thakur. It the remake of famous Telugu film named Jersey released on 2019. It is schedule to release on 31st December 2021.