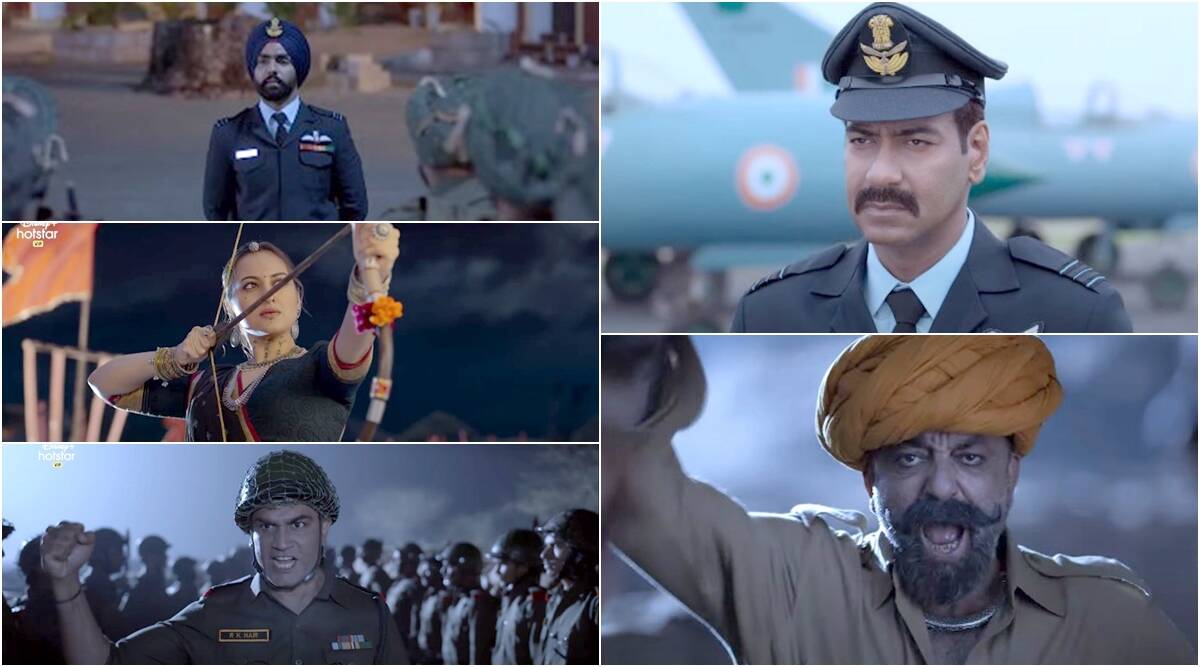 In the starting of this movie we see, in 1947 Pakistan divided in two parts – 1. is west Pakistan, and 2nd is East Pakistan. But East side Pakistani’s used Bangla language at the place of Urdu. That is why Pakistani always tortured the East Pakistani. After that in 1970’s East Pakistani and Hindu’s raised their voice against Pakistani. But the result President Ya-Ya-Khan and Genral Tikka used operation searchlight and killed 30lakh innocent. After that hindu army went to protect East pakistani’s. Moreover in this fight Pakistan’s East part merged in India, and now they all are hindu.

Now scene shifted and we see,in Islamabad, genral is planning to kill more people in India. Because they are aware that indian army is busy in Eastern border. So this will be the wright time to attack there. Therefore Genral search the place in India, and make a plan to attack in Bhuj Airport.

In the next sene in 1971, Bhuj Airport, where Pakistani’s fighter jet is attacking. People are unaware what is happening there. So many people has died there, meanwhile Vijay karnik is the commanding officer at Bhuj Airport, he tried to fight against them bravely. But Pakistani was on there jet so they gang up on Vijay and he get unconscious.

Two Weeks Before Of Bhuj Attack –

Ranchod Bhai Savabhai Rabari( Sunjay Dutt), he is an indian agent and living in pakistan. Moreover there was many indian agent is living. MD.Hussain Omani is the millitary inteligence head in Pakistan, and his big aim is to distroy India. His wife is Heena Rehman, and she is too agent from India, who is living with Hussain. Now Hussain and his team sent some Pakistani agent to India. Then Heena shared this message with Savabhai, and Savabhai informed to Vijay karnik. After that Vijay immediately find all Pakistani informer and killed everyone.

When MD.Hussain get aware that his, all informer, and agent has died in India. So he make a plan to attack on Bhuj Airport. Meanwhile he find that Heena is an Indian agent, who is sharing all information. When Hussain go to attack on her, But here Heena shooted Hussain and he died. She tried to fight bravely but at last she died.

Pakistani jet fighters distroyed everything there, they blocked all five way to reach in Bhuj Airtport. Moreover they attacked on Vikram Singh and his plane crashed at sea. But he is alive. Now Vijay get senses, but there is no way to communicate with other state, furthermore all ways have blocked by Pakistani.

Now Vijay is taking nearby villagers help to construct a bridge, here we see a girl Sunderben(Sonakshi Sinha). She is motivating villagers to help Vijay. Finally they start to construct a bridge where they are collecting cement bags, and in this bag they are adding some blast slag. After that when Pakistani tried to walk on that bridge it’ll blow there.

In the next side, Savabhai and karnal Naayar is too making a plan fight against pakistan. So they are going in Pakistan, but at Pakistan border, Pakistani army is asking for their identity. They already change their identity as a pakistani. Moreover Savabhai is informing them – 1500 indian army is still alive in Bhuj, and suggesting them to use that bridge.

Now Indian army is fully ready to fight and Pakistani army is too ready to use that bridge. Vikram is taking his fighter jet with 150 army, and flying at sky. During this scenerio his jet wheel saprated from the plane. So he can’t landed safely. Non stop firing is going from both side. Savabhai and Karnal is fighting against Pakistani and they killed many Pakistani soldiers there.

To safely landed the plane, Vijay make a plan to land the jet on the truck. But it may go risky because Truck speed may increase 400km/hr. But Vijay has decided and now jet is landing on the Truck roof, then truck is moving further, and unbalancing. Finally Vijay handled it safely, and saved 150 soldiers lfe.