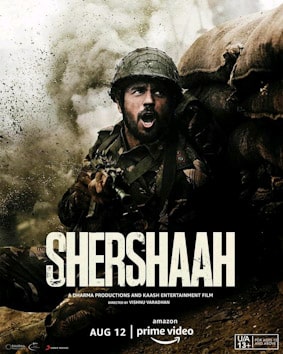 Shershaah is true story of brace India Soldier The life of Indian army captain Vikram Batra. Altogether he awarded with the Param Vir Chakra. Shershaah has Sidharth Malhotra in the titular role along with Kiara Advani. Check here to read “Shershaah” Movie Review And Full Story Explanation. Moreover you can find here another movies and web series review.

In the starting of the scene we see, Kargil War is going against Pakistani, Vikram Batra along with other soldiers are fighting for their nation.

Vikram Batra had a desire to join the Indian Army since from his childhood. He belongs to middle class family, altogether Vikram had made his dream come true. Therefore he has finally joined indian army, and his first posting is in Jammu&Kashmir.

Now all are praising Vikram’s work. After that at the same night Vikram is reading a letter of Dimple.

Story we see in Flashback –

Vikram likes a girl in his college and his name is Dimple. After some time, they decide to marry with each other. But Dimple’s dad is saying they are belongs to Sikkh, and Vikram is from punjabi Khatri. So they can’t marry. But here Dimple is obstinating – If they will not fix her marriage with Vikram then she will live alone, her rest of life.

However she convinced her dad, meanwhile Vikram decide to join Indian Army.

In the next scene, terrorist “Haider” is looking furious to find them, who is sharing all secret details with the Indian Army. Therefore he makes an attack, here many soldiers had died. Now Vikram decide to find Haider, and he is asking from “Araslan”. (Araslan is a guy who secretly worked for Haider, and now Haider is preparing him with 5 to 10 guy other to go across the border at Pakistan). Araslan is scared therefore he shared Haider adress with Vikram. Vikram is now taking permission from his lieutenant officer to complete this mission. Moreover he allow him, and Vikram successfully encountered Haider.

After that Vikram is going to his home on vacation, he is spending a good quality times with Dimple. But in between his vacation time, Vikram watch a news on TV, terrorist is attacking on border. Therefore Vikram decide to go back.

In the next scene lieutenant is working on another mission. Altogether, this time Vikram unit is not involved in this mission. But Vikram forcefully is requesting from lieutenant to handovered this mission to him. Moreover he get agree.

Now all soldiers are on mission, Pakistani terrorist is non stop firing. They made their bunker on hill, so all the soldiers are reaching there. They are firing, meanwhile to save a soldiers life, Vikram wounded, but they killed all terrorist there. After that Vikram Martyred in this mission.

Moreover all crowd gathered to pay tribute to Vikram.