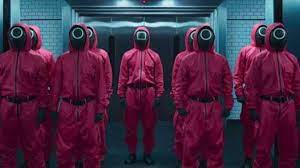 All 80 players were taken for the thrid game.

They were asked to make a team or group consisting of 10 players. So the all players do the same and make their team.

Jang is aware of the upcoming game, So he didn’t include Sae-Byeok’s female friend in his team. He makes his team only consisting of males.

In the next side Doctor and guards were taken out the organs of dead bodies. So here to deliver these organs Guard no.28 and guard no.29 will go. Guard no.29 was none other than the officer who has to deliver the organs. Officer arrives and dressed as a guard and suspects these dead body is of his brother. Because he also has one kidney, and the body from which they are taking organs consisting one kidney.

Guard.No.28 says to officer, he can take all of the information while going to the leader’s room. Because there is data of everyone. After getting this information, officer killed and shooted Guard.No.28 from his gun.