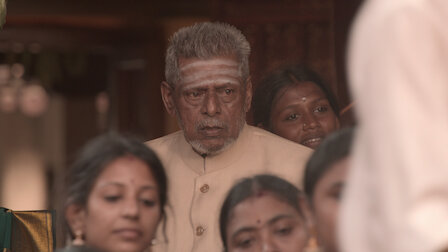 In the starting of the episode we see one famous quote of Diane Ackerman – “Fear is danger to your body, But disgust is danger to your soul.” It indicates the theme of the episode is near about disgust. When story begin we see one person is going towards the temple for his prayer. In his way to temple husband and wife meets that person & say Namaste to him. Husband introduce that person to his wife as Subhu’s Uncle because he forgets Uncle’s name. He ask uncle for his name again. But Subhu’s Uncle tells him why bother asking my name? You are just going to remember me as Subbu’s Uncle. As if my name matters. Who cares about my name? It shows Subbu is famous person in the town and his greatness is sung all around town & his uncle is jealous with this.

Subbu’s daughter marriage function is happening to his house. In the next seen we see lady talking to Subbu’s Uncle. Uncle completed his prayer and now he is doing squats. After seeing his squats she ask why the excessive devotion to Lord Ganesha today? Uncle saying in response Why? Is there a rule that I shouldn’t do squats? Lady knows that uncle is killing time so that he can avoid wedding. Subhu’s Uncle don’t want to join that function. So in order to avoid function he is taking more than usual time. Now in angry mood Uncle is saying he don’t want to attend wedding.

Next Subbu’s home seen comes and in that Subbu seems very happy after seeing his daughter’s smile. She is looking pretty after makeup. Subbu is now searching Uncle in his home. Uncle has one son named Natarajan and one daughter named Bhagyam. Natarajan is also searching his dad as he is out for a long time even in this special day.

In next seen kitchen shows where all workers are doing their work of preparing delicious food for wedding. Head chef is looking all the food preparation and saying to workers to complete the work. Natarajan is checking all the preparations as Groom’s side is about to reach for wedding. Natarajan says to all children’s to stand in the main gate and welcome the guest by sparkling the rose water & then saying namaste to all.

Now Natarajan’s younger sister Bhagyam is checking whether the bride is ready for wedding or not? She then goes to kitchen to handover the store room key to Head chef. She also appreciates the special Payasam being made by Head chef for all the guests. Bride is also ready now for wedding function.

In next seen we again see that lady with the Uncle. Now we gets the clear picture about that lady, she is nothing but Uncle’s wife Valambal. She was died a long ago but even now Uncle imagines her everywhere and talks to her about Subbu and family. Uncle’s wife telling him that you did wrong to Subbu all the time. But even after that he reaches that heights because of his hard work and now he is also giving you half of what has earned. She is saying Subbu gave you these thing because of affection. But Uncle is ignoring everything because he hates Subbu and he is very jealous of his success. Uncle’s wife explaining their children are alone in the wedding house and what they will think about you? So please go to home and attend the wedding.

Uncle then realized the moral values and stand up & goes to home. Groom’s side has already reached for wedding and function has been started. Children’s has been welcoming every guests & Uncle also reaches the house. Then Subbu comes in search of him and gives special coat to him for marriage. Subbu is saying Uncle you are the eldest of our family so you should wear that coat and also takes blessings of him.

Wedding function is going very well and every body is enjoying the function. Uncle is also sitting in the wedding place. In that place also Uncle is talking to his wife in its imagination. Uncle is looking so jealous to see the celebration. He don’t like Subbu. When Subbu comes in the wedding place people started to make place so that Subbu can go ahead and Uncle felt so ignored that he decided to ruin the celebration. So he went to then kitchen and topples the whole Payasam vessel. Then he tells others that he saw rat in the Payasam and blamed Head chef why don’t you covered the vessel? Uncle also tells to chef to do his job with responsibility. So the story teaches us how disgust and jealously can ruin the life of you and others.