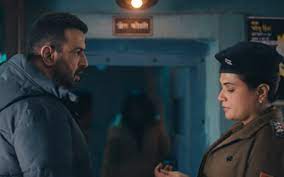 Ending of Candy Season 1 Episode 3, we have seen, that Jayanth knew the truth of Bayu. Therefore Bayu wants to kill Jayanth, and he kidnapped Naresh. Is Bayu invove in all murder mystrey? To know full story read Candy Web Series Season 1 Episode 4 Story Explanation In English. Moreover you can find here another movies review.

“Imran” is going inside the Jayanth house, and he is taking Jayanth laptop. Meanwhile Jayanth came there but he escapped from there with Kalki’s handycam. But when Imran check that camera he found memory card is missing from there.

Therefore Jayanth handovered this memory card to Ratna. But Ratna gave this to Atmanath. Meanwhile Atmanath informed , Ranawat about the memory card, in which Mehul is exposing Bayun, Imran, Sanju, and John.

Meanwhile Kalki and Jayanth reached there and they seen all this incident.

Now all genralist came there to cover this news, altogether Ratna received a phone call from her senior, and they are shouting on Ratna, to appointing her there. So they suspend Ratna from her job. In the next side Jayanth is too shouting on her, because Ratna kick him out from this case.

Now Ratna is going to Jayanth house and asking sorry, and saying that she have only 2weeks, she wants to exposed Mashaan real story and real culprit behind this mess.

You Will Get Here Money Heist All Season Explanation.