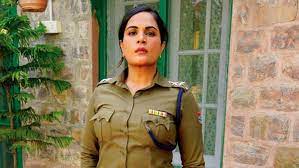 Candy Season 1 Episode 2 ending story we saw, Kalki met to Jayanth. Where she is talking strangely that Mashaan wants to kill her, and he killed Mehul. Who is Mashaan? To know more about the show read “Candy” Web Series Season 1 Episode 3 Story Explanation In English. Moreover you can find here another movies review.

Story turns in 4years ago –

Where a girl “Leena” is going somewhere, meanwhile Bayu comes there, and forcing her to sit in his car. But she is denying because she is Bayu’s girlfriend, but Bayu is dating two girl together. That is why she is angry, and decide to go alone. Meanwhile she saw a dangerous Demonic character, in front of her and they called them “Mashaan”.

Scene shifted and we see, Kalki’s father Naresh is digging and hiding a box there.

Now Jayanth is asking Imran, Sanju and John, and saying that he know everything about them – they take drugs in candy, and they sell these candys further. Jayanth is asking him to confront their mistake. But they didn’t open their mouth.

Moreover Imran text a message to Bayu, – That Jayanth knew everything.

Now Mehul’s autopsy has started and they find a knife from Mehul’s stomach. In which “Naresh” name is mention. Therefore Ratna goes to arrest him, but he escapped from there.

Police is thinking Naresh is killer, because they find Naresh Knife there, and he is escapping from police. But Jayanth is seeing this case from different side, But Ratna doesn’t want to Jayanth involvement in this case.

Now Jayanth reached in his home, and asking full truth of last night what happened? – Then Kalki said Mehul wants to exposed Imran, Sanju, and John because they bullied everytime to Mehul. Therefore Mehul was following them last night in a club. To protect Mehul, Kalki was following to him. But someone tried to gave us some candys forcefully. Therefore they get lose their senses and ran inside the jungle. Where Kalki Find Mashaan came there and killed Mehul.

Next day Jayanth notice someone is following his car, when he stopped his car in bridge, he find two mask man is coming near to him. Then Jayanth saw, they kidnapped Kalki’s father, inside their car, and these mask men is – Bayu and Luca, they are hitting Jayanth.