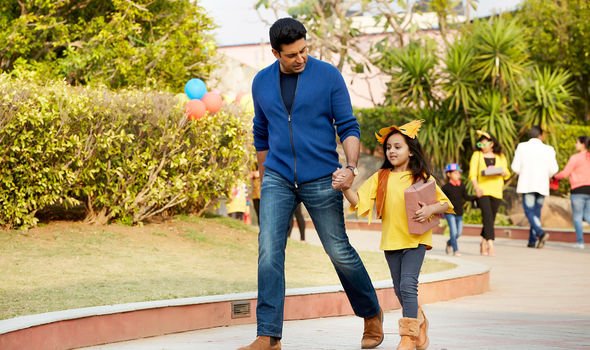 Here in the first scene of this Episode Gaytri Mishra is with her mom who is doing worship in Devi Maa Temple. Where she request her mom- Mom my exams begin in two days, So if you don’t mind can i go to sleep? Gaytri mom gives her permission. When she is on the way, suddenly someone come there and kidnapped her.

Here in the next scene we see doctor Avinash is in the court. He is there as a witness, of Chandani case,& she murderd her mother, father,and her uncle , aunty. Dr Avinash is Chandani Psychiatrist doctor, and he proved in a court she is not mentally weak, she is just acting. Because she wanted to marry with her boy friend but family refused. So thats why she murderd her family.

Now in the next scene Dr Avinash returned to home where she met with his wife Abha and their daughter Sia.

After that Avinash comes in a party where he is finding Siya. He is calling her name. But she didn’t come back. Then she inform his wife Abha, they looked everywhere. But they didn’t to able find their daughter Siya.

Abha start to shout on her husband Avinash, because due to his carelessness, Siya is not there.

Then they both take police help, where police want to watch parties camera. But they found the camera is covered by ballons. Now police is trying to find their daughter.

Now 48hour has passed but kidnapper didn’t make any call for them. Furthermore police didn’t able to find Siya and her kidnapper.

Now Abha print an article about her child. Moreover she shared many news of her child in social media account. Now she is sharing all posters. But she didn’t get back her child.

Now its have been 3 months. But they didn’t able to find her daughter. Avinash is making her understand but Abha is saying she won’t be move on, I’ll find my child.

“Finally They Get Siya Information”

Now one day next in the morning Abha receive a parcel which has for Avinash. When Avinash open the parcel, they find an I-tab there.in which they are looking Siya’s 3 months video recording. Where Siya is crying for her mom, dad. They found she is not alone there Gaytri is with her [Who kidnapped in 1st scene of this Episode]. Gaytri is take caring of her.

Where kidnapper send a message for Avinash – Sorry doctor, I took very long. It only took three months for Siya to stop crying. So she is fine now. But now, I need your help to keep her fine. If you want to Siya back, Then I won’t ask you for money but for something else. “Pritpal Singh Bharaj”- You will have to kill him. But the reason for Pritpal Singh’s Death should be his anger. You must record his death and send it to same number. I have only 10 to 11 days of Insulin for Siya. So if you want to save your daughter then kill him before 10 to 11 days.

And The Ends Here.