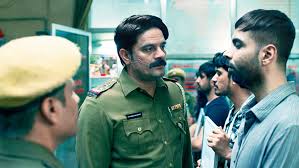 Patal Lok Hindi Indian web series is based on special operation of the Delhi Police. Subsequently They arrested four criminal, and it reveal all the suspence about these criminals. To know all about the full series read Patal Lok Season 1 Episode 1 Story Explanation In English. But before that read Patal Lok Web Series Starcast, Character, & Important Role. Furthermore watch Patal Lok web series in Amazon Prime.

Here in the First episode of this web series Hathiram Choudhary is explaning his junior Imran Ansari – Why this place is Patal Lok?. Moreover Imran Ansari have newly posted here.

He explain him The universe is segregated in to three universe 1st one is Heaven, second one is Earth, and third one is Patal Lok ( which belongs to the insects the creepy crawlies) Same as the three universe is – Our station outer Jamuna Paar which is earth Patal Lok ( Here is No matter how good is your investigation and no promotion solving a dfficult murder case, aur rascals case).

Now Vishal Tyagi, Topp Singh, Kabir M , and Mary Lyngdoh these four people are staying in a hotel. Furthermore same morning they four go from hotel,& sit in a car, Where Kabir M is driving. After that they find someone is following them, who is DCP Bhagat and his team. Finally they got arrested. Meanwhile Topp Singh through his fon in the river. Mr Hathiram Choudhary come there and Dcp Bhagat give order to Hathiram – book these four under your police station outer Jamuna Par Thana. When Hathi Ram asked Dcp Bhagat – what will be the charge on them? Then DCP Bhagat told him – Conspiracy to murder.

Then Hathi Ram took them in a Outer Jamuna Par Thana. Now Police and their team is searching their identity, They are asking their name but they four are standing silently.

When Sanjeev Mehra goes to home from their office. He find the all media and reporter is following him and asking him a question. But he ran away from there. and then staying at hotel in a night.

Next morning when he reached his home he find Hathi Ram is there for some personal inquiry. He asked some question to Sanjeev furthermore he provide two police officer for his safety.

Now Hathi Ram and his team member Imran Ansari is searching the criminal record of four of them. Where he find Vishal Tyagi criminal record is – Kidnapping, ransom, extortion, and 45 murders.