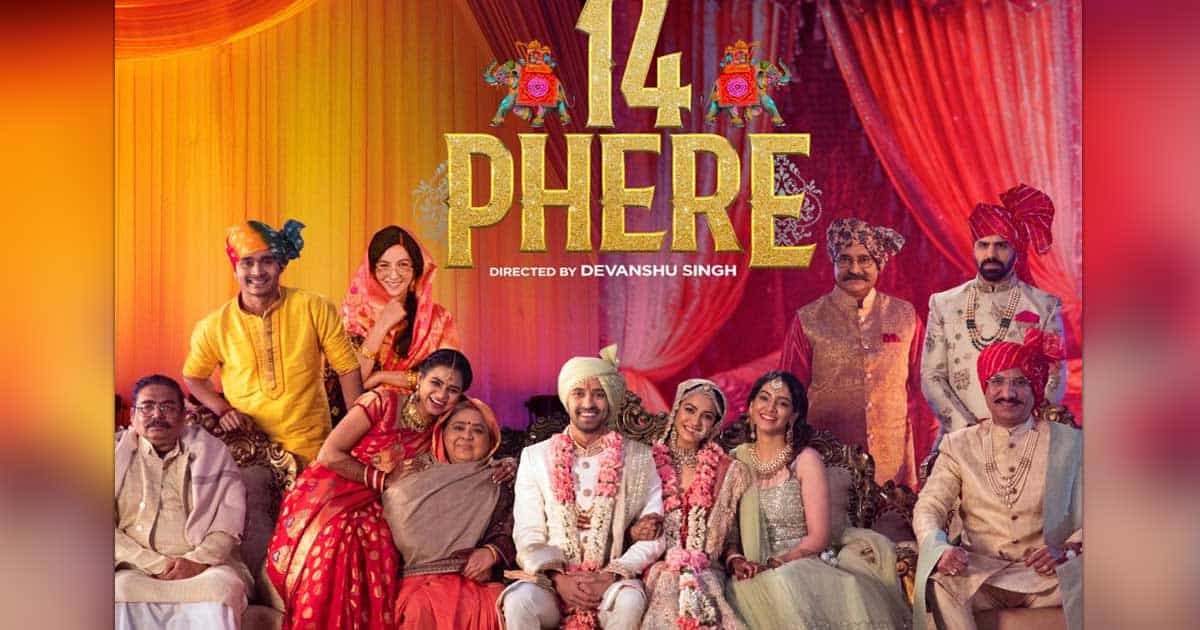 14 Phere is a 2021 Indian Hindi-language social comedy drama film. Which is directed by Devanshu Singh and produced by Zee Studios. Main cast is following by Vikrant Massey, and Kriti Kharbanda. You may check here 14 Phere Movie Review & Story Explanation In English. Moreover you can find here another movies review.

In the starting of the movie we see a man, Sanjay Lal Singh(Vikrant Massey), and he’s performing in a theatre. Altogether he worked in a multinational company. Sanjay and Aditi(Kriti Kharbanda), is living together in a same flat. But they can’t think about their marriage, because Sanjay belongs to Rajputh family and Aditi is from Jaat.

Now we see flashback story in a college –

Sanjay is Aditi’s junior, One day Sanjay’s senior gave him a task to prpose Aditi. Consequently, Aditi is saying to feel sorry evrytime when you see me anywhere. slowly -slowly love grows between them. When they completed their study they worked together in a same multinational company.

Aditi’s boss is offering a job in US, but Aditi is denying because she want her joining there with Sanjay. Because this is the one way they can marry there. Meanwhile Sanjay receive a call from his house, where his father asking him to come home? Next day Sanjay reached at Kanpur. where his cousin “Chotu” is telling him, shweta ran away with a guys, therefore Sanjay father decide to kill Shweta and that guy. After that Sanjay father fixed his marriage without asking him. Therefore Sanjay tells them, that he loved a girl, and she belongs to same caste.

Now Sanjay reached at Delhi, where he planned something big for their marriage set up. He shared his plan with Aditi, that they will introduce their fake parents with both family. Zubina is playing fake mother role, and a theatre actor is playing their fake father role.

Sanjay and Aditi’s colleague is playing fake relative role. Next day Sanjay’s haldi ceremoney, and their marriage successfully done in front of Sanjay’s family. After their marriage, Sanjay’s cousin Chotu has seen Aditi’s real caste in a document. So he’s informing Sanjay, he know Aditi belongs to Jaat family.

After that Sanjay and Aditi decide to escape from there. But Chotu said them, he didn’t tell anyone, about their relation truth. But now Sanjay father is aware that sanjay is talking to his sister “Shweta” quietly. Moreover Sanjay father wants to kill Shweta.

Next day Sanjay is taking permission from his home, that he and Aditi is going to attend their friend marriage. But Sanjay father is suspecting on them, he’s thinking Sanjay is going to meet Shweta.

Next day Sanjay is getting marry with Aditi, in front of Aditi’s family. Meanwhile, Sanjay’s real family arrived there. Where both families is confront with each other, and now they all know the truth. Therefore Aditi’s family wants to kill her.

So now Aditi and Sanjay is emotionally convincing their family. Finally they get marry in front of their real families.