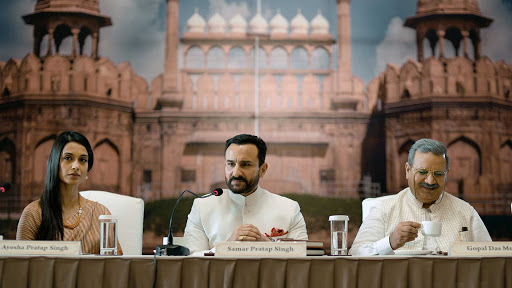 At the end of Episode 8 we have seen that how Gurpal threat Maithili, and then Maithili is trying to collect proof against Anuradha. After that Maithili gave all proof to Gurpal. Moreover Shiva have made his indepandant party named TANDAV. What will be the election result? Now How will Anuradha save her PM chair? Because Samar have a solid evidence against Anuradha. To know all about that read Tandav Season 1 Episode 9 Story Ending Explanation In English. Furthermore you can watch Tandav full web series in Amazon Prime with subtitles.

Here in the next scene Sana Mir went home, where she is telling her sister Ada, – We’re not safe here, They tried to kill Chetan and now it’ll my turn. Just pack your stuff, we have to leave. Meet me at the Khan Market bus stop at 5.00pm.

“Who’ll Be The Next PM?” Tandav Season 1 Episode 9 Story Ending Explanation In English

Now Anuradha has admitted in the hospital according to Samar Pratap Singh plan. Where all news channel making this breaking news. Furthermore Anuradha give resign.

And then everyone clapped for him.

And The Season 1 End’s Here.