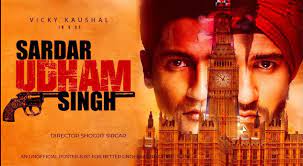 In the starting of the movie we see Udham Singh to get out of jail after four years. 4years back Udham Singh found to fought with some indians at a bar. Because they was following britishers dictator. Udham Singh’s name used to be Shersingh earlier. SherSingh shares a good bond & friendship with Bhagat Singh. Moreover they both was together fighting against britishers. Therefore Bhagat and SherSingh made a party named HSRA(Hindustan Socialist Republicon Assosiation). But After 4years when SherSingh get out of jail Bhagat Singh was hanged by the britishers. So HSRA parties some member has martyred in freedom fighting wars and some is behind the bars.

1931 – Udham friend comes to meet him, and he provide Visa & Passport of London to him. But Britishers is keeping eyes on Udham’s every activity. Because he was a freedom fighters. Therefore somehow he manage to go from there.

One fine day Udham meets to “Eleen”, she fights for eqauality, and she know Bhagat Singh very well. Therefore she get ready to make Udham her friend. After that Udham,buy some illegal weapons from IRA. Then he reached to Russia, but he didn’t find some productive there. So he again decide to go London.

This time Udham’s known one provide him Michael’s address. Now he started to following him, and keeping eyes on Michael Dwyer’s every activity. One day Udham meets to Michael, and asks him for job. Then Michael, provide a house servant job to him. Here Udham find that Michael, hates indians, and he is not guilty what he did with indians at Jallianwala Bagh. Therefore Udham decide to leave his house.

31st July 1940 – Udham joins a confrence of Michael, he hides the gun in between the books. While end of the confrence Udham shooted Michael in public. Later he arrested by the Cops. After tolerate many torture of cops, & court, he even didn’t disclose anything. Udham Started hunger strike at jail, but forcefully cops, and doctor breaks his hunger strike.

After that Udham was hanged, and at that time he kept Bhagat Singh photos in his hand.