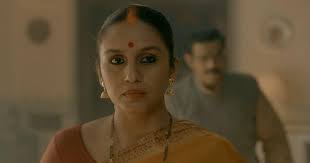 In the starting of this episode we see, 1998 story at Moriyana Village Bihar. Where, Dilip, after spent 4years in Delhi, now he visited in his village. So here he meet, the village head Mr.Roy, who beleived in Caste-discrimination. But Dilip Oppose Mr.Roy, because of equalitiy therefore Mr.Roy shoot him.

Now we see, Bheema-Bharti, he’s the CM of Bihar, furthermore he goes home once a year. Therefore, his wife Rani, is getting angry with him. They have three child, SuryaPrakash, JayPrakash, & Roshini. But Rani’s authority is more at home, and her husband always helped her in households works. Moreover, this news got viral, and people start to praise CM, because of his humble nature.

But health minister, at house Patna, Mr.Naveen, can’t digest this news. Because they are from opposition party.

In the next scene, Shankar Mehtu Lal, is protesting against mr.Roy, because of his behaviour towards backward tribe people, and caste-discrimination. Shankar belongs to lower caste, and he’s talking about equalities in society. So he shoot everyone there, who had involved in Dilip death.

Next day, the same news is now on public, so the villagers is hitting bad slogans against CM Bheema Bharti. Naveen is taking advantage from this massacre, so he’s provoking public against goverment. Moreover, he’s starving, and saying – If goverment is unable to arrest Shankar, then CM, should have to leave his chair.

In the next side, Naveen’s colleague “Prem Kumar” is going to meet Shankar, meanwhile he saw police there. Now we see the next viral news on media, that Prem Kumar gave 25lakh Rs cash to leader of racism Shankar, furthermore police is the witness,