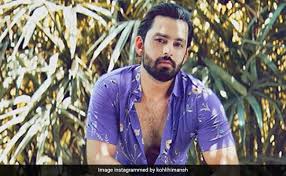 Himansh hometown in Delhi, and he spent the lockdown there. He said in his interview he is the first actor who took a flight for home during lockdown. But this lockdown was productive for him, he did workout at home, cooking with the help of mom, and video calls with sister etc. But now Himansh Kohli Got Back To Work After Eight Months.

Himansh family his father, mother, and his sister had tested positive from COVID -19 at last week of august. At that time his test came negative. But after some time 1st september he had mild symptoms of virus like headache, fever, bodypain, weakness, breathing issue. When he went to tested himself his riports came positive. His complete family isolated. But after some time they all recovered and they all won the fight against COVID virus. He said we need to understand and help each other in crisis.

Now Himansh Kohli is back on his feet, and after eight months he got back to his work. In november 1st week he went Mumbai. He said we have to live with the virus, It’s part of life now. Because during lockdown he realised he have to go out how long he can sit at home, you need to face the problem, and also fight against them.

Now Himansh Kohli in Chandigarh. Himansh is shooting for a music video with Jubin Nautiyal in chandigarh last week. Finally after long time of a period he is starting shoot with a video album which will release soon.