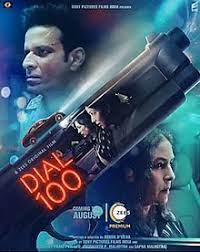 In the starting of this movie we see inspector Nikhil( Manoj Bajpayee), and he is working in a police control room. Meanwhile an unknown woman dial 100 number in a police station. When Nikhil receive this call, he heard – Woman is crying in a call, and saying that she want to sucide. Now she is talking casually with Nikhil – Some months ago, she lose her child Amar in a car accident. That is why she want to kill that guy who killed her child. Then she disconnect her call.

When Nikhil share this case history to his colleague Gulam. They find at the same place a road accident had occured. But in this case no women was involved. After that a man comes there with a tea cup. When Nikhil asked him who are you? Then a tea-man reply – he is uncle of Mangesh. (Mangesh is the guy who have a tea-stall near police station).

Next day Nikhil again receive her call – when Nikhil asked her how she know Nikhil name? Then women reply – She know him very well, and she know Nikhil have bought two gun. After that Nikhil get socked to hear, when he try to ask her something meanwhile all server in control room get off.

In the next scene a lady reached in Nikhil home, and where she meet to Nikhil wife Prena. Consequently this lady forcefully took Prena with her. Then lady tells to Nikhil that she kidnapped his wife Prena, after that she disconnect her call. Now Nikhil found this lady number has registered from Seema Pallav name, and she is the mom of Amar Pallav who died in a road accident. Nikhil son Dhruv sell illegal drugs to their friends.

Some months ago Dhruv sold cockin and drugs to his friend Yash. At that night Amar had died in a car accident and his car has bumped by Yash, an intoxicated state. After that Amar mom decide who’ll involved in Amar death case, she’ll take revenge from them.

In the next scene Control room, server wire has intentionally cut by someone, due to this they can’t trash Seema’s location urgently. After that Nikhil aware, a tea man, who is calling himself Mangesh uncle, has cut the wire. he is Seema’s husband Chandrakant, and now Chandrakant is pointing a gun on Nikhil, in this scenerio they both are scufflieing, meanwhile by mistake Nikhil fired a gun on Chandrakant.

Seema is threatning Nikhil to call your son to take yash in “Tandav Club Parking area”. Nikhil is following Seema’s order in compulsion, and Dhruv took Yash in parking area. Where Seema take them in a gun point. Meanwhile Nikhil reached there, and Seema fired a gun on Yash and Dhrv.

Then Nikhil is too fired a gun on Seema.

Now we see, next scene in Hospital, where Yash recovered but Dhruv has died. Now Yash father is offering a lots of money to Nikhil for close this case.

But Nikhil is very upset from his son death, that is why he make a phone call to Seema, and asking her to viral all recording related to Yash in media.